We decided to go to Scandinavia again this year and just hope for good weather this time. We drove to Frederikshavn in Denmark, left the car behind on a hotel parkinglot and rode our bikes onto the ferry to Göteborg. 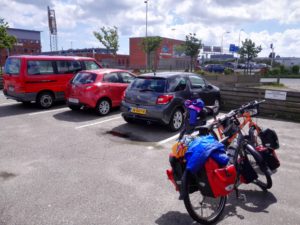 After a couple of hours on the water, we arrived there and cycled the first 25 kms (16 miles) to a campground in the town of Kungalv. The next day started rainy, but after a while it dried out and the termperature was fine. 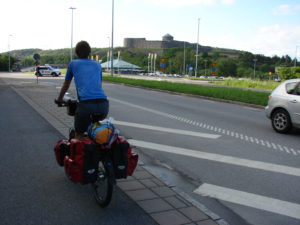 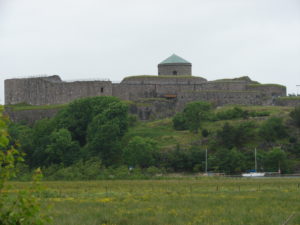 We cycled through Sweden for a little over a week and rode long days. Through Lidköping, Otterbäcken and Nora we rode to Orsa on the shores of lake Siljan. Then through Särna, Högvalen, Swedens highest town at 830 mts/2500 ft, and ski town Funäsdalen to the Norwegian border close to Røros. We slowly gained altitude and the snow was getting closer and closer. The weather was good, a rainshower or 2 every day but the rest of the time it was a mix of sun and clouds. The temperature was around 20 C (70 F), so it was great cycling weather.

We tried to find as many unpaved roads as possible, which made us feel like we were the only people on this planet. We rode on these hilly roads through endless forests, passed many lakes and small (holiday)towns.

Because those roads are almost deserted, we saw quite some wildlife. Many deer in the beginning, later on also moose. And a snake a few times, either warming up on the road surface or squashed by a car. At one moment we saw this huge owl sitting on a pole right by the road. He looked at us with his big eyes and then turned his head away. Very special!

We freecamped just once in Sweden, it was a beautiful (fishing)spot in the forest and next to a small lake.

We left Sweden being warmed by the sun, we were welcomed in Norway by cold and rain. We arrived in Røros in pouring, icy rain.