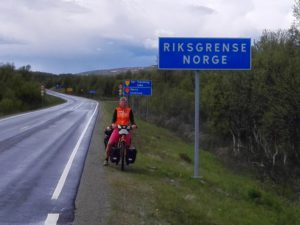 We were almost blown and flushed out of our tent in Røros, but the next day the weather was a lot better. It just was very cold due to the strong, icy wind. From there on, we started on our way home since we would be going South again.

Again, we tried to ride as many unpaved roads as possible. Cycling was a bit harder than in Sweden, but that’s how we had expected it to be. That’s why we made those long days in Sweden, so we would be able to slow down in Norway and enjoy the beautiful nature and scenery.

Through mostly unpaved roads, part of which an old toll road, we arrived in Alvdal. Then we had a short day with a bit of (unexpected) mountainbiking because the route we wanted to take turned out to be a mountainbike path, because we found a good camping spot on the highlands, next to yet another toll road.

We had a restday in Otta, also because the weatherforecast for the next afternoon was very bad. Lots of rain, and that turned out to be true. The next day was a lot better again and we headed to the 2 famous unpaved toll roads Jotunheimvegen and Peer Gynt vegen. These roads lead you through nature and highlands, so we did have some climbing to do to get to the start. We rode on a beautiful paved road which took us higher and higher and brought us very close to the snow again. It also took us to the highest point of this trip, at 1389 meters/ 4200 ft.

We found a nice camping spot on both unpaved routes, close to water, so we pitched our tent and enjoyed the scenery. It was still very windy, so it stayed very cold to. We didn’t bring our gloves for nothing and also the rainsuites came in handy, even though it wasn’t raining.

Peer Gynt vegen ended with a very long downhill, from 1000 m (3000 ft) to 200 m (600 ft) in 20 kms (14 miles). The more we descended, the warmer it got. We wanted to go to a town called Dokka, but it turned out there was this huge climb on our route. It turned out to be 750 altimeters (2250 ft) in 9,5 kms (6 miles), of which 500 mts (1500 ft) in the first 4,5 kms (1,5 miles). A lady told us that the Norwegian cyclist Boasson Hagen was from a town in the valley and he always used this climb as a training climb. Well, it’s a hell of a training climb! Fortunately it got a lot better after the top; still a few hills, but then it went down for many kms, all the way till Dokka. Another beautiful, unpaved route where we hardly saw anybody else. And beautiful weather!

From Dokka, through Sundvollen to Oslo. From Sundvollen to Oslo we found another unpaved route through the forests north of Oslo. We had 1 day to spare, because the ferry we booked would be leaving the next evening. So, we still had a whole day to clean some stuff, pack everything for the last time and enjoy the beautiful weather. The last couple of days had been very nice; warm and sunny.

The ferry left at 7:30 pm and we arrived in Frederikshavn the next morning at 7:15. Put everything in the car and drove home, which took us 3 hours longer than planned because of bad traffic. 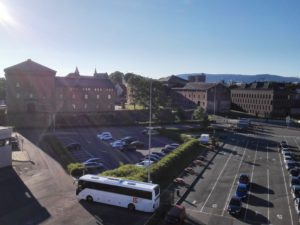 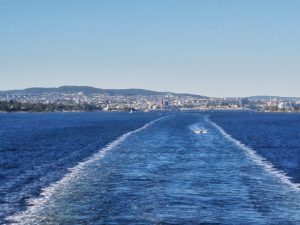