Summer has arrived, so time for a vacation! It was quite hard to figure out a destination, there are so many choices. But because we only have 3 weeks, we didn’t want to travel very long/far and we wanted an easy to reach destination. So we decided to go cycling in Norway if the weather would be good. If not, the plan was to take the roadbikes and go to France.

It turned out to be Norway. The weatherforecast was good enough to decide to go there. So we packed our stuff and loaded it in the car, together with our bikes, to drive to Denmark. There, in Hirtshals, we could park our car in the parkinglot of a hotel and got on the ferry to Norway. We decided to start in Stavanger and end in Bergen, 3 weeks later to take the ferry back to Denmark from there.

The trip to Stavanger went very well, it was a night ferry so we arrived in Stavanger early in the morning. We were on our bikes before 7 am and the weather was great. First to the city center to take another ferry. We arrived at Preikestolen campground around noon and decided to hike to the famous Preikestolen rock that same afternoon. The rock has a straight drop of about 600 meters (1800 ft) down to the Lysefjord. An impressive hight and view!

The next day we got back on the bikes with sore legs from the hike. We didn’t have to go very far, because we had to take another ferry. This time to the town of Lysebotn, at the other end of the fjord. We had to wait a while to get on the ferry, but the weather was still great, so we could sit in the sun. Pitched the tent on Lysebotn campground and prepared for the long and hard day to follow.

And, indeed, it was a very long and hard day. It started with a hairpin climb of about 10 km (6 miles) with an average gradient of 10%. It seemed never-ending. We had to go from 0 to 930 meters (2800 ft). And that was just the beginning! It seemed like we would never descend, it kept going up and down. But it was beautiful up there, a world of snow and ice. Finally, we started descending, but then followed another long climb. This time we had to go to 1050 meters (3150 ft). After some more hills, we could finally descend and after 74 very hard kms (50 miles) and almost 2000 altitude meters (6000 ft), we were down.

The next day, the weather had changed completely. It was grey, foggy and drizzely. Another day with a lot of climbing and less descending. In the skitown of Hovden, we were allowed to warm in the local tourist information center and we were given a hot cup of coffee/tea. When we arrived on the campground later that afternoon, the lady felt so sorry for us that she gave us a big discount on a cabin so we didn’t have to camp. So we spent the evening in a nice, heated cabin.

Thursday was another day with a lot of climbing to do. The day didn’t really turn out the way we expected it to. It started with the dense rain. We decided to leave anyway, hoping it would get better. We climbed higher and higher and came up to 1000 meters (3000 ft) high, in a beautiful, mysterious world of snow, ice and fog. Very beautiful, but also pretty cold. Then we found out we had a problem. There were 2 very long tunnels through which we weren’t alowed to cycle. There are small roads around them, the old roads, so we started with good hopes. But that didn’t last long! After just a small ride, the road was covered in snow. We pushed and pulled the bikes through, one by one and could then ride a little bit further till the next snowfield blocked our way. We tried another section, but after every hill we discovered more snow. So we had to turn around, we just couldn’t get through. About 7 kms (4,5 miles) before, we warmed ourselves in a restaurant, so we went back there to ask for help. It turned out there would be a bus passing about half an hour later so we could ask if we could get a ride. Fortunately there was enough room on the bus for our bikes, so after a bit of begging we could get on. The bus took us right through the 2 long tunnels, so it was perfect for us! After the tunnels, there was a stop where we could get off and we could cycle the rest of the route. It all went down, so it didn’t take us very long.

So we made it to the town of Odda after all. We had hoped to end up there, but after our snow adventure we hadn’t expected to get there. Today, we had a day off for administration and laundry and we will continue further north tomorrow. We also had company today; Vincent and Jeanette (met in New Zealand) are in Norway to and they came to visit us today. Had a bbq and a good time together before we say goodbye again tomorrow. 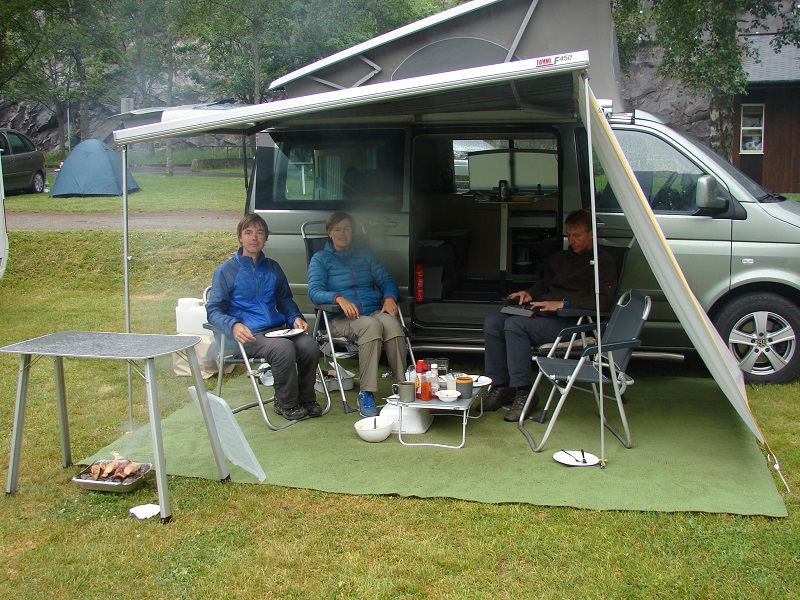 One thought on “Back on the road”