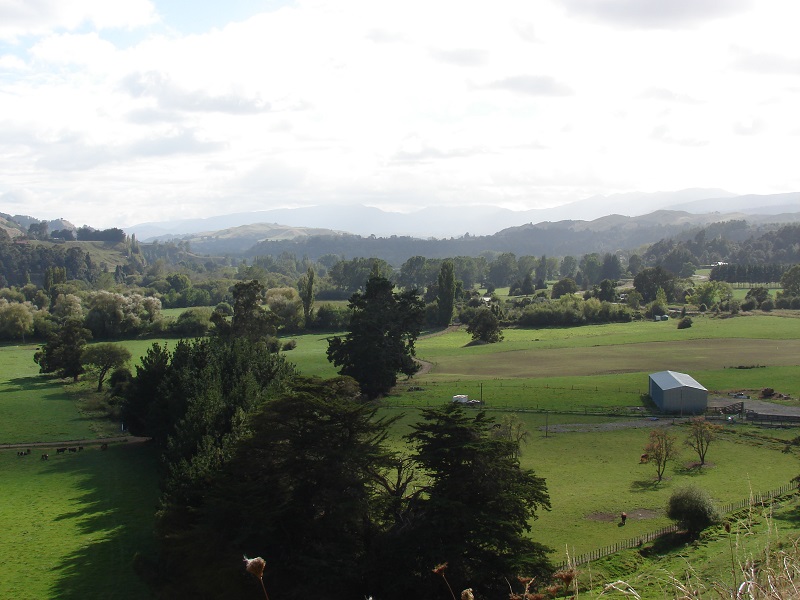 There are 2 (easy) ways to travel from the South Island to the North Island (and the other way around); by air or over water. Because most of the tourists in New Zealand rent a motorhome, they have to cross by ferry. So, nowadays, there are 2 ferry companies who sail back and forth a few times a day. The journey between Picton and Wellington, the capital city, takes 3,5 hours.

We left the campground very early in the morning, since the ferry left at 8:00 am. It was barely light. It was foggy most of the crossing, but when we arrived in Wellington the sky was clear again. Wellington is supposed to be a very nice city, but we didn’t stay because another storm was coming and we wanted to be as far as possible and wait it out in a good place if necessary.

We noticed the difference with the South Island immediately. The road was very busy, but also because it was a Sunday afternoon and many people came back to the city after a day or weekend away. So most of the traffic came from the other direction. And it was green! Many hills again, but green this time. Much greener than on the South Island. It was obvious that there was no drought here. 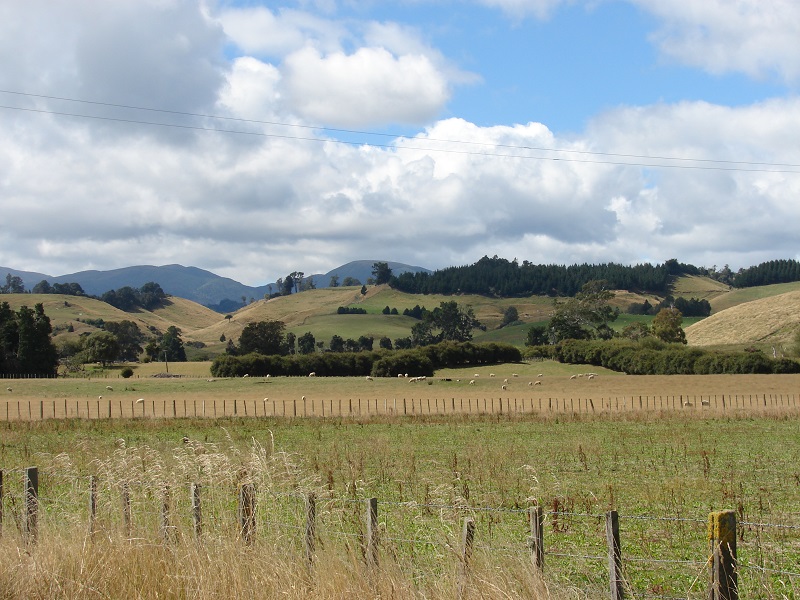 After some flat kms, there was a long climb; up till almost 600 meters (1800 ft). It was a nice and gradual climb, not very steep. We had heard and read a lot about the steep hills on the North Island, but this wasn’t one of them. 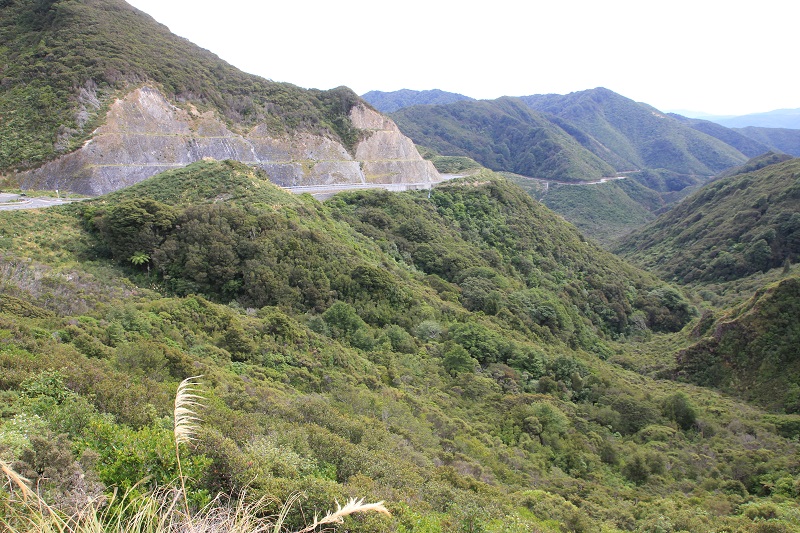 We ended the day on a small campground and pegged the tent securely in a sheltered spot. That night, the remains of cyclone Pam would hit the mainland and we were supposed to get a lot of rain and wind. We were ready; we had enough food to be able to stay inside for a day.

The next day we woke up with the sound of rain on our tent. But no wind! When the rain stopped after we had breakfast, we decided to pack up and at least go to the next (larger) town, Masterton. Once there, we would decide what to do next, depending on the weather; stay there or keep going. When we arrived in Masterton, after having cycled in the rain for about 20 kms (12 miles), we decided to stay. So we did some shopping and went to the campground. Once our tent was pitched, the sun came out! So we had a sunny and relaxed afternoon. But the next day it was raining again, so we stayed. We still had enough time to get to Auckland.

Fortunately, the next day it was dry again so we could continue. While relaxing the previous day, we read about 2 cycling routes in the direction we wanted to go. So we decided to do those routes. We cycled on small, quiet roads with almost no traffic. But many hills! Short, steep hills, but not as steep as we had expected. Not steeper than the passes on the South Island. 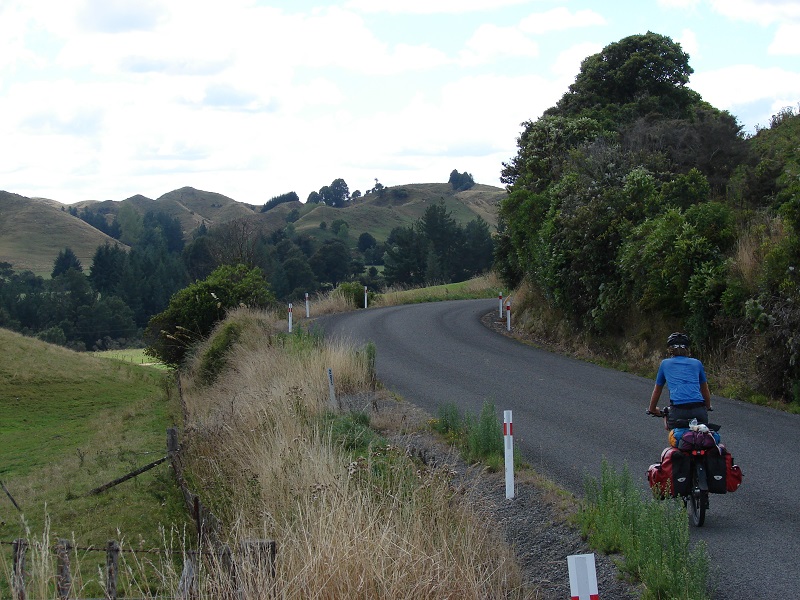 After a few long days, we arrived in Tongariro National Park with its volcanos. We decided to take it easy, cylced only a few kms the next days and did a short hike in the park. We didn’t do the famous, 7 hour, Tongariro Crossing hike because the weather wasn’t very good and we didn’t have a backpack to take some extra clothes. Too bad…

We decided not to go to Taupo; too touristy, too expensive and nothing to do for us there. So, no need to go there. We cycled the other, hilly side of the lake. A nice route and not a lot of traffic. We camped for free on a lakeshore and cycled to Rotorua the next day. We did want to go there, even though we had been there before and we have seen similar places before. And it became necessary because the day before, Linda’s rear outer tire tore on the side. She could keep cycling, but we didn’t know how long it would hold. We made it to Rotorua and were given a free, used tire from a bikeshop on which she should easily make it to Auckland. 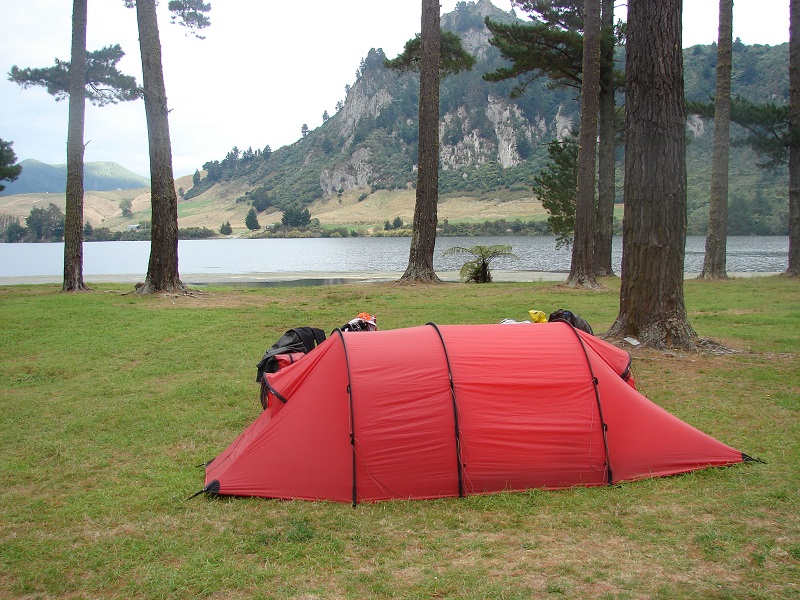 Rotorua is known for its thermal activity which is visible everywhere. Boiling mud, boiling water, hotpools, sulpher smell and steam; it has everything. And right in the middle of the town. There was a hotpool on our campground en some of the tent sites were thermaly heated.

Rotorua is also heaven for mountainbikers. There are many trails and a big bikepark where the Cranckworks event was going on. Many pro riders and amateurs showed their tricks. We watched some of them and decided that we would just keep to touring for now.

From Rotorua, we went further north. We passed the town of Matamata where the movieset of the Hobbit is located. You can actually visit the set and it seems to attrackt many people. A little bit more to the north is the Hauraki Rail Trail, just like the Otago Rail Trail in the south. A flat, car free route which ended in Waihi for us. The last part was through a gorge and passed an old mine and to get there, we had to go through a large and dark 1 km (0,6 mile) long tunnel. Fortunately it wasn’t busy, so we could keep going without any problems.

We went back the same way the next day, so back through the gorge and tunnel. We could have gone a different way, but that would be a big detour and probably very hilly and we didn’t want that anymore at the end of the trip. So we went back a bit and turned toward the coast. Then it was only 2 days cycling to Auckland. The last night we camped on the beach. It was beautiful and there were only a few other people. It reminded us of our last camping spot before San Francisco, on Angel Island.

We arrived early at the campground in Auckland; the closest one to the airport. After we had pitched the tent, we went to the airport to check if they sold bike boxes. It would be less hassle if we could just buy them there, instead of asking all the bikeshops and then having to get them to the airport. They did have boxes, so that would be easy.

It didn’t take long to pack because we didn’t have much. Our plane left at 11:00 pm on Sunday, so we also had that whole day to fill. We arrived at the airport nice on time, which was good because the boxes turned out to be smaller than what we had read online and had expected. So the bikes had to come apart more than we expected. But it fit and we could check in.

We left at 11:00 pm for the long, long journey home. We left Shanghai with a 1,5 hour delay and would most definitely miss our connecting flight from Paris to Amsterdam. But we were lucky; that flight was also delayed so we were able to catch it. Even our luggage made it on the flight. That night we slept in our own bed again.

So, we were back home again, after almost 3 months and 4500 kms (2700 miles) in a beautiful and varied country. We’re happy we chose to spend as much time as needed on the South Island. The North Island also has its beautiful areas, but we prefer the fastness and emptyness of the South. New Zealand inhabits 4 million people, 3 million of which live on the North Island (1 million in Auckland). On the larger South Island live only 1 million people. it’s not hard to imagine that there’s much more traffic on the North Island, but there are also some nice small, quiet roads.