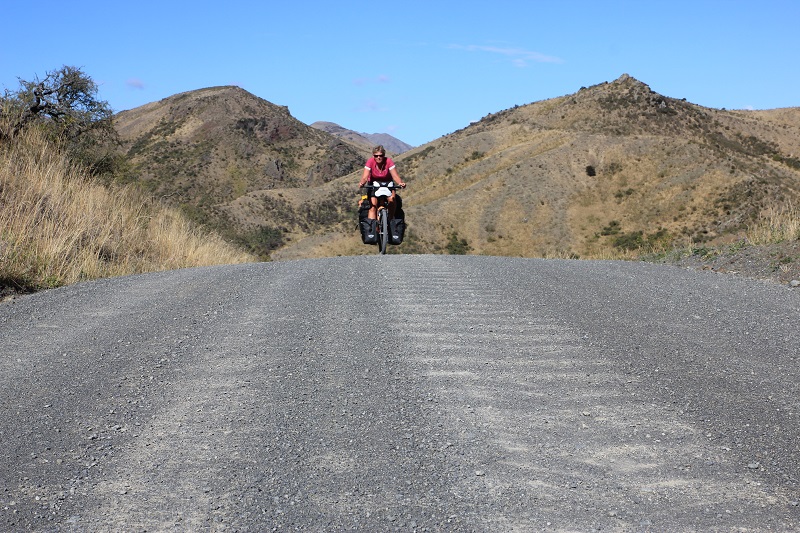 When we left Motueka, we knew the weather was going to be bad for the next 2 days; storm and a lot of rain. We decided to go halfway St. Arnaud and wait out the weather there. Normally we would have cycled to St. Arnaud in 1 day, but there’s no supermarket in town so if we got stranded for a few days we wouldn’t  have enough food to cycle the 2 unpaved trails.

So we went to Tapawera, about 50 kms (30 miles) from Motueka. We watched the weather forcast on tv that evening and it didn’t look good. And it did storm and rain the next morning. The wind kept picking up and it started raining a lot harder during the morning. But in the afternoon it cleared and the rest of the day it was warm and sunny. According to the forecast, it would get worse the next day. When we woke up, it was dry, but it wasn’t long before it started drizzeling which changed into (hard) rain soon and didn’t stop all day. We were glad we had chosen to stay. So we had 2 more unexpected restdays and we spent our time reading and browsing on the internet.

It turned out that the weather had really been very bad in the area, especially the first day. In our little town, branches got blown off trees, half of the town of Westport (at the coast) was flooded and the road from the coast to Murchison was closed for a while because a landslide had blocked it. And, as it would tun out later, the bad weather had more in store for us.

After 2 days in Tapawera, the weather was good again and we left for St. Arnaud. The day started sunny, but ended very cloudy. But it was dry. We went to the Visitor Centre in St. Arnaud to ask for the weatherforcast. There, we were told Rainbow was closed due to washouts and slides. Not good! But then we talked to some cyclists who had just come through. They had been stuck there for a day to wait out the weather. They told us that it was doable, but very hard. Lots of walking and pushing. So we decided to just go and see where, if, it would end.

So we left the next morning, destination unknown and with black skies above us. The first part was paved, then the pavement stopped. We met a guy from the farm (Rainbow Station, where the road goes through, is a large farm) and he told us the road was closed. But cyclists should be able to get through and he let us go on. Later we met some other guys and they told us the same. So we could continue!

The beginning wasn’t bad, we just had to cross some streams a few times. We cycled through a forest and entered a sort of valley. We saw blue skies in front of us, so that was promising. And it wasn’t long before the sun came out. We met another cyclist who said it had been hard. But he made it, so so could we. We soon found out why it had been so hard.

After about 50 kms (30 miles) we were at the first campground but it was still early, so we decided to go on. About 11 kms (7 miles) further, there was a hut where you could sleep and that’s where we wanted to go. It would be halfway down the whole route. But then, the misery started. Because we had entered a more narrow part of the valley, the walls were steeper. All that wind and rain of the past days had caused the walls to collapse and cover the road in debris in many parts. Sometimes we had to search for where the road continued. We pushed, dragged and pulled, one bike first and then the other. Those last 11 kms (7 miles) were some long kms… We walked more than we cycled.

But we made it and it wasn’t even that late when we arrived at the hut. There was nobody there, so we settled in and filtered water. We had just started preparing dinner when another cyclist arrived, a girl from Switserland. She was very happy she had made it! She had done it all by herself. When it was almost dark, another cyclist arrived; a guy from Germany. But he pitched his tent. We were nice, warm and comfortable in our hut with the woodburner.

The next morning started with the last part of the climb to Island Saddle, with its 1347 meters (4050 ft) the highest, by public road accessible point in New Zealand. The last 2 kms (1,5 mile) were very steep, up to 12%. We were happy when we were at the top. From there it gradually went down on a bumpy road. At the turn off to Hanmer Springs, we said goodbye to Meta, the Swiss girl. She wanted to go to Hanmer and enjoy the hotsprings and we wanted to continue on to the Molesworth trail.

It was only about 18 kms (11 miles) to the first campground on Molesworth. Fortunately not a lot of hills and pretty flat. There’s a gate at the site of the campground. Officially, the road was closed due to firedanger but cyclists could go through. That meant that we would have a very quiet ride. No noisy cars to dus us over. Tim, the ranger stationed at the campground, gave us filtered water and saved us a lot of work. He also let us take a shower in his cabin. Such unexpected luxury!

Molesworth Station is the largest farm in New Zealand. The land is formed by 3 farm that were united. In the old days they had many sheep, but nowadays they have cattle. About 10.000 Angus and Angus/Hereford cross cattle. They can handle the circumstances of heat in the summer and cold and snow in the winter better than sheep. Nowadays it’s run by the Department of Conservation. Nature is important, but it’s still a working farm.

The Molesworth trail was beautiful and very hilly! Again, through a valley, but a bit wider than Rainbow so we could see a bit more of the scenery around us; high mountains. And, of course, a pass to go over; the Wards Pass. This one was not as high as Island Saddle, 1145 meter (3450 ft), but not less hard. In the last 1,15 km (0,7 mile) we had to go up 150 meters (450 ft) which meant a gradient of 13-15%! The steepest climb so far and even on gravel. After that there were about 10 hilly kms (6 miles) to go to the campground, where we were also given filtered water.

We planned 85 kms (51 miles) for the next day so the day after it wouldn’t be so far to Picton anymore. It turned out to be 85 hard kms! In theory we had to go down 700 meters (2100 ft), but in reality it wasn’t that easy. One hill followed the other. Long hills, short hills, steep hills and a bit less steep hills. It never ended! At the end of the day we had climbed 1300 meters (3900 ft) and had descended 2000 meters (6000 ft). We were happy when we finally arrived at the little campground.

That also was the last day out in the wildernis. After 4 days of peace and quiet, we entered civilisation again.These 2 trails, together with Arthur’s Pass, were the most beautiful rides we did (so far) here in New Zealand. We’re very happy that we could do them and were very lucky with the circumstances and the weather. If we hadn’t waited out the bad weather, everything would have been a lot different.

We cycled past enormous wineries and arrived in Blenheim through one last, unpaved, pass; Taylor Pass. There, the real business started. We had to go another 25 kms (15 miles) to get to Picton and those 25 kms (15 miles) were on a very busy road. So we hit reality immediately! Found a campground with view on the water, a little outside Picton.

So, after 3400kms (2100 miles), this was the end of our tour on the South Island! Tomorrow we’re taking the ferry to the North Island. We spent a lot of time over here and cycled all nice and for cyclists interesting parts and passes. There’s not a lot of time left for the North Island; we have to get to Auckland in about 3 weeks. Looking at the total distance, we should be able to make that, but we won’t have a lot of time to do sidetrips or other activities. But that was a choice we made; we wanted to take our time on the South Island and cycle as many nice routes as possible.

3 thoughts on “An adventurous week”