After crossing the border in Tijuana, you’re in San Ysidro, basically a suburb of San Diego. So in our minds we were already in San Diego by then. Close to our hotel was a diner and a shopping centre so we went groceryshopping first and then went to the restaurant. We bought good stuff and were finally able to eat something else than beans/rice/chicken/meat. It tasted great!

When we were on Baja, we camped a couple of times. One of those times was in the little village of Puerto Escondido, a few kms/miles before Loreto. When we were about to leave the next morning and stopped at the little store for some food, we met a guy; Jorge. He’s Mexican but has lived in San Diego for many years. He had been on vacation on Baja and was on his way back home. He offered us a ride, but we declined because we wanted to cycle the whole peninsula. Little did we know then about the headwind and boredom… We regreted refusing his offer many times. He also offered us to stay on his boat when we would be in San Diego. He works in a harbor and his sailboat is also there. We didn’t refuse that offer!

We called him from the hotel we stayed the first night and asked if we were still welcome. We were, so the next day we cycled to the harbor. It was a nice route, on a peninsula and we had to take a ferry to get to downtown. From there, the harbor was close and easy to find. Of course there was the (very) stormy headwind and it was pretty chilly. 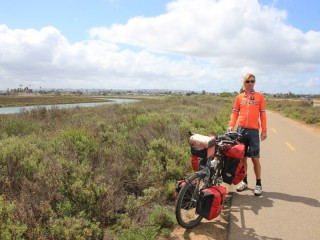 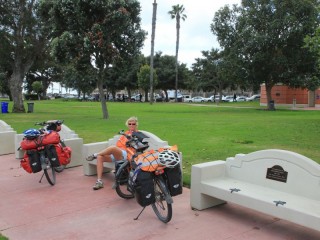 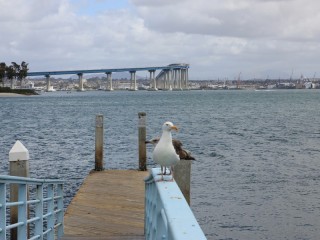 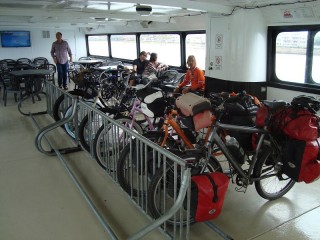 When we arrived at the harbor it didn’t take long to find Jorge. He showed us his nice boat; plenty of space, tv and even internet. We could stay as long as we wanted and we could also use one of his cars. So we went to the supermarket right away to buy food for a couple of days.

The next days temperature went up and up and it turned into a real heatwave. A very early heatwave with a lot of wind. But we could use the pool in the harbor, so we could cool off.

We used the car a lot, it was great being able to go anywhere (quickly). We went to the famous San Diego Zoo and to the Safaripark. The zoo is very famous for its beauty and one of the few zoos in the world with Giant Panda’s. They also have koala bears. Jorge got us free tickets for the Safaripark.

Thanks to Jorge we could also go to the aircraftcarrier museum USS Midway for free.

The world famous Navy trainingcentre Miramar (Top Gun) was near San Diego (but they moved it to Nevada) and on the ship there was also a F14 Tomcat, the type of plane they used on in the movie. With a little imagination we could see ‘Maverick’ and ‘Goose’ sitting in there and chasing Migs. The whole harbor area breaths Navy. There are many aircraft carriers and other vessels and there is a large base. Helicopters and planes fly over often and they train dolphins to search their vessels for bombs. They train them close to the harbor where Jorges boat is.

We met other very nice people at a barbeque, organized by the harbor and the last day we went sailing with Jorge. Then it was time to leave, we had been there over a week so it was time to go on. We had a great time on ‘our’ boat! Thank you so much, Jorge! 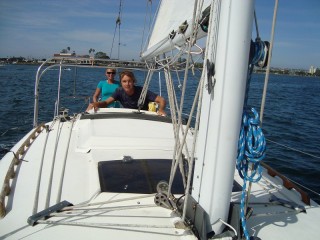 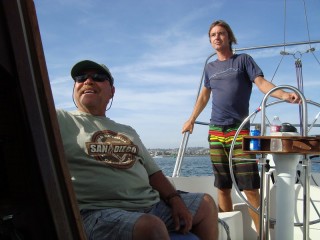 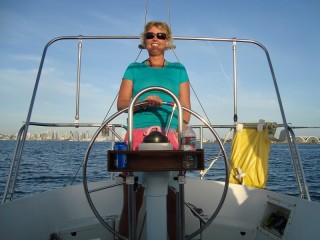