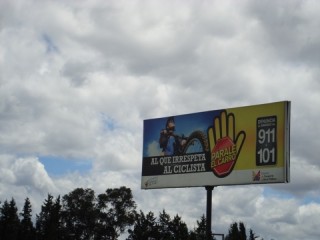 After Loja the cycling didn’t get any easier; the hills were just as steep as before and there still were no flat parts to enjoy. After we had just struggled uphill for hundreds of meters (yards) we went down the same amount of meters only to go up again. The scenery stayed very nice and divers, also because of the difference in altitude.

We cycled the approximately 200 kms (120 miles) to Cuenca in 4 days and stayed there for a few days. We cooked ourselves good meals in the hostal, where we could use the kitchen. Finally a kitchen to cook our own food! We couldn’t eat any more chicken with rice and fries. 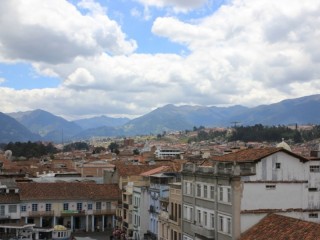 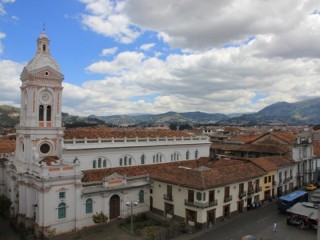 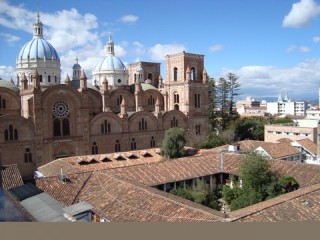 We stayed in the mountains for a few days after we left Cuenca and then turned right, towards the jungle. That meant we had to go up again first and then a descent of 2500 meters (7500 ft). Unfortunately, all this happened in the pouring rain, so we couldn’t see anything of the scenery. The volcano Sangay disappeared in the thick mist and all other things that were around us also weren’t visible.

The descent was cruelly interrupted by roadwork. Over here that means that many kms of road are being destroyed, only to really improve a few centimeters (inches) a day. Before they do that, they make a huge mess of the road. Sand, rocks, bumps, holes; it’s like they think ‘the worse, the better’. Sometimes, in the middle of all that mess, there’s a small section which is paved already, there is absolutely no logic to it. Because it had rained so much, in this case the road was one big mudpool. Cycling was impossible, so we had to walk on that slippery thing they called a road. The weels stopped spinning after a while because the mudguard was full with mud.

The stretch through the jungle was warm and sticky and there were mosquitos (of course). There was no real jungle like we had expected; almost all the big trees were cut. But it was very green with tropical trees, plants and animals (birds). And it smelled great, like in a greenhouse or a gardencentre. Unfortunately, we didn’t see many tropical birds, but we did hear them. All day long we would hear them sing. There also are different species of snakes, including the fake coralsnake. In total we saw the huge amount of 1 live (little) snake. All the others were run over by cars. 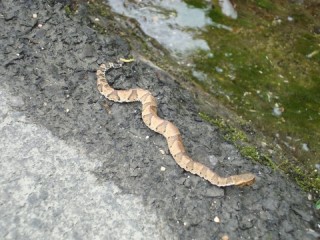 Because we wanted to go back to the mountains, we had to climb up again. It took us 2 days with a highest point of 2700 meters (8100 ft), but fortunately the road wasn’t as steep as the roads in the south. The weather stayed unreliable and we had 1 huge tropical rainstorm. Fortunately, right at that time we were having lunch on a covered sportsfield where we could shelter from that huge amount of rain. 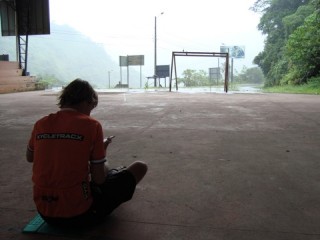 We spent the night in the town of Baños, a very touristic town which we thought looked like an amusement park. You can do a lot of things there like ride in a buggy, rafting and a whole lot more things. It didn’t make us very happy… We saw people on mountainbikes who were rolling down the hill, thought of themselves as very adventurous and then took a bus or taxi back uphill to the town while we were cycling up on our heavy-packed bikes. There also should be a very beautiful and very active volcano if we may believe the travelguides, but this one also was hid behind many thick clouds. 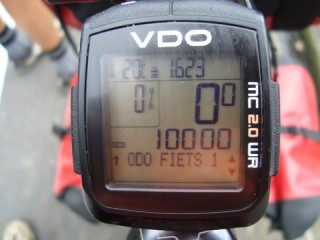 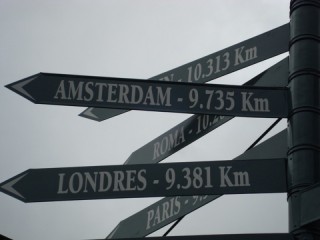 When we arrived in the city of Ambato, we were done with the climbing because we were back in the mountainregion. There’s a ‘Casa de ciclistas’ in Ambato so we went there. The people themselves were going to leave that night for a few days at the shore, but we were free to use the house. After the many different places we spent the night over here (hostals, camping in the yard of a police station, camping somewhere halfway a pass and sleeping on the floor of a building on top of a pass), we were in a real house again. And we had the whole house to ourselves, such luxury! And it was time to do some bike maintenance and laundry again! 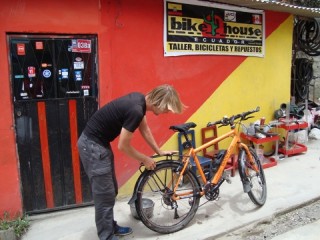 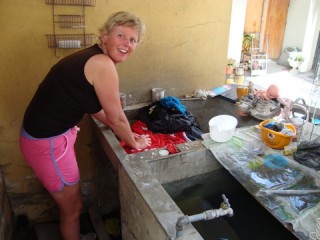 In Ambato we booked a short vacation to the Galapagos Islands; last minute, so a bit more affordable. We leave on September 18th and return on the 23rd. First we fly to the islands and then we board a cruiseship to cruise around the islands. We’re looking forward to it!

After Ambato we ended up on the real highway; busy and noisy. We didn’t like it at all. Fortunately we could get off after about 55 kms (33 miles), to the National Park Cotopaxi. The Cotopaxi is a still active volcano with a beautiful snowcapped peak. Because of the heavy clouds we could only see a glimpse of the peak a few times.

We saw dark skies coming toward us and it became worse every minute. It started thundering and we got to a visitor center right in time to shelter from the huge hailstorm that followed. It was dry again after an hour and we could continue. We found a beautiful spot to camp, right at the base of the volcano.

The first day the road was pretty good; paved for a large part and quite smooth (but steep) for the other part. The second day was different; the road became nothing less than a path and the last part were cobblestones. There’s not much worse than cycling on cobblestones, you can’t go faster than about 5 km/h (2 mph) and it also went steeply down so it was bad for the (new) brakepads. 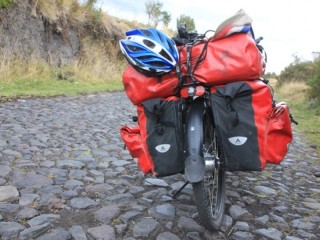 Now were in Tumbaco, close to Quito. Again in a Casa de ciclistas. Here we can leave our stuff when we go to the Galapagos Islands. Here we met ‘Mr.’ Kim and the kids again.