On the 18th of September, we flew from the airport of Quito to the Galapagos Islands. We booked a 6-day cruise. 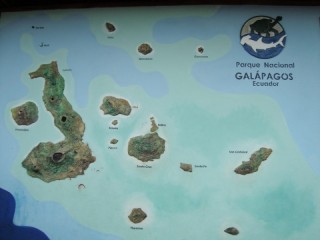 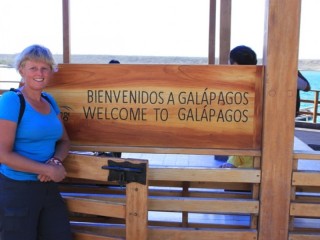 The islands are not really islands, but volcanos. All land that you see are the volcanos themselves (in the form of hills; the actual craters) or the lava that came out with previous eruptions. Many of them are still active. The ground is black, from the lava, apart from the small beaches. Some of them are sandy, others are lava sand. The plants and trees that grow there were taken by the wind or maybe birds.

The animals of the Galapagos islands are unique in many ways. They are species that live only there and in no other places in the world. The islands are volcanic and originate from volcanic eruptions so they have never been attached to the mainland. The animals that live there somehow arrived by accident. Only the strongest species could survive the trip and life on the islands. Slowly, those animals adapted to life on those islands.

Because every island is different from the others and have different circumstances, the animals on the islands are not (completely) the same either. For example, on the largest island, Isabela, there are 5 volcanos. There also are 5 species of land turtoises. They never mixed because they couldn’t reach eachother because of the rough surface of volcanis ash and lava between the volcanos. That surface is so sharp that they (and we humans either without ruining our shoes) can’t walk on it. The turtoises are all different because the circumstances of living are different on all sides of the volcanos. There are not many different types of animals on the islands, but every island has its own species of animals.

There also are no predators (mamals) on the islands, only 1 species of hawk. Because of this, most animals don’t have natural enemy. The original cormorant that lived there could fly, but because of the absence of predators, flying became unnecessary and they lost their ability to fly. The wings are now too small to be able to fly.

On the airport of the island of Baltra, somebody of the crew was already waiting for us. We didn’’t have to do anything, only hand over our luggage which was taken to the ship separately. After a short busride, there was a short ride on a little boat and then we went aboard the ship, the Santa Cruz.

The trip started with a welcome talk and lunch. Breakfast and lunch were buffet, so we could choose and take whatever we wanted and how often we wanted. There was so much food! Diner was a 4-course diner where you could choose between meat, fish or vegetarian for the main course. Then there were snacks after every excursion. So we had enough to eat!

The days started at 7 am with the wake up call. After breakfast the first activity of the day. That could be snorkeling, walking or a boatride along the coast. Back on board for lunch and then another activity. It was a busy program, but this way we dit get to see many things and animals. 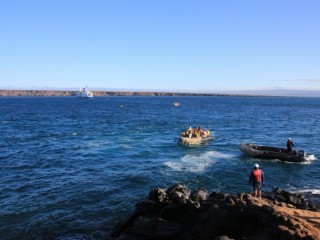 That first afternoon was the first activity. We went to one of the islands to watch the animals there. We were treated to iguanas (marine- and land-), turtoises, birds (blue footed boobies, cormorants, frigate birds, pelicans), crabs, penguins and sea lions. We would see many more of them the next couple of days.

The animals are not frightened at all because they don’t see humans as enemies. Therefor the don’t run/walk/fly/crawl/swim away when there are people around. You can walk around and they continue what they were doing, usually nothing. We had to be careful not to step on any iguanas while walking around. The sea lions also didn’t care about us being there and stayed right where they were.

During a boatride along the coast, a curious sea lion came up to the boat. He swam around a bit, sniffed the boat a couple of times and lifted himself out of the water a bit to check what or who was in the boat. Then he jumped on the boat and looked around a bit. After a few minutes he jumped back into the water. 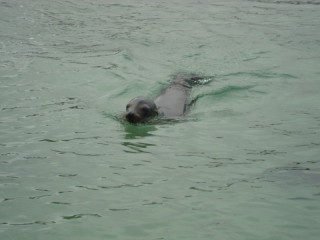 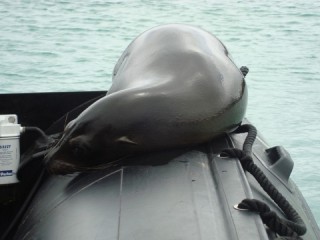 We went snorkeling a couple of times. The water was cold, but it was well worth it. The sea turtoises were hovering around us and the sea lions wanted to play. They came very close, so close we could have touched them if we had wanted. There also is coral with colorful fish, sea urchins, sea stars (starfish) and little jelly fish. We saw rays and sharks during a kayaktrip.

On the 21st, it was Linda’s birthday. During diner the night before, all of a sudden the lights went out, a birthdaytune sounded and a couple of crewmembers came out of the kitchen with a cake with candles… A chocolate cake to celebrate the great day to come (over here they seem to do that the evening before the actual birthday).

That day we went kayaking. We had to walk over a beach first and then we came to a bay where there were sharks (reefsharks) and rays. The sharks also don’t swim away when people get close. We could walk right to them and look at one up close, even through the murky water. 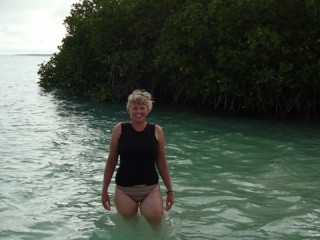 We also went on shore, to the largest town on the islands. There they have a research centre where they breed turtoises to save the different species. There also was a fishmarket where some individuals tried to steal the fish… 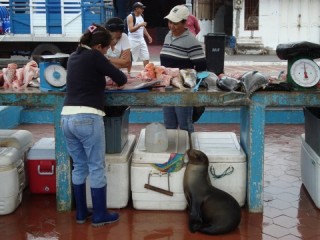 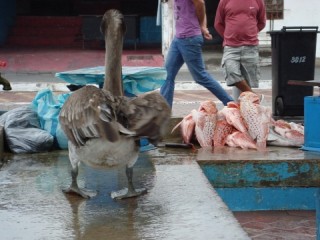 We also paid a visit to ‘Postoffice Bay’. That’s a stretch of beach where there’s a (wine) barrel. It was introduced by the sailors in the old times to be able to send a letter home. They put their letters in the barrel and the next ship that passed by did the same. They then checked the other mail in the barrel and if that had to go to the same country they lived in or went to, they’d take it and delivered it to the right address. Now there’s still a barrel and the system works the same. You put in a postcard or whatever you want to send to somebody and you take out something that is addressed to somebody in your country. When you’re home you can either deliver it yourself or put a stamp on and have it delivered by the mailman. But the idea is that you deliver it personally. 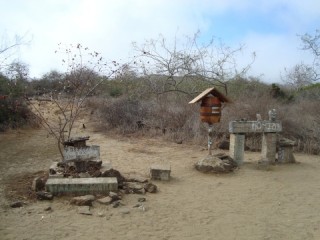 The last day existed of breakfast, looking at pictures and fly back to Quito. It was over already! We had a good time and met some nice people again. Even though a group trip is not really our cup of tea, it was nice not to have to think of anything or take care of anything for a few days. Everything was planned and taken care of.

Tomorrow we will leave Quito and head further north. Next stop: equator, only 1 day of cycling away! Then we will be back on the Northern Hemisphere!

6 thoughts on “The Galapagos Islands”