After 3 days of doing nothing, we decided to leave for Cerro Castillo anyway. Another 2 days of cycling. The road was wonderfully good and flat, only a few hills compared to what we had been through already. So we were able to get a lot further than all the other days, instead of doing 60 kms (36 miles) we did 80 kms (47 miles) that day. Then we saw a good spot to pitch our tent and decided to do that because you never know when you will see a next good spot. 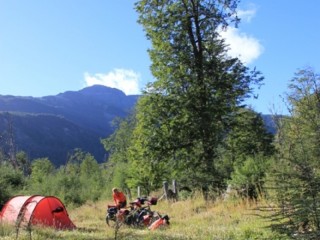 The next day we had only 45 kms (27 miles) to go to Cerro Castillo. That also started good, pretty flat and at one point even a road that almost looked paved. But the road was very dusty because of the volcano dust from the volcano Hudson. It erupted a few years ago and caused a lot of problems and a dusty road. But the good road didn’t last long… About 25 kms (15 miles) before the town there was another climb, the road became very bad and when we finally went downhill, the road was so bad that we couldn’t go faster than about 6 kms/h (4 mph). When we were resting, a bus drove by with somebody standing in it and waving frantically. It was Chris, who went from Cochrane to Coyhaique by bus to get money. For some reason they weren’t able to get it in Cochrane.

Finally we arrived in the town, about 5 kms (3 miles) later than the signs had tol dus. And yes, there the gravel ended and there was the tarmac (well, concrete). And this time it didn’t last until the end of the town. Great! 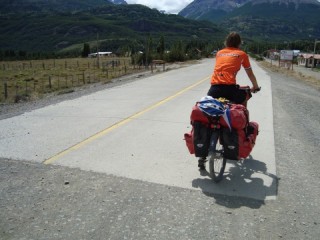 We had lunch with a restaurant which is famous amongst cyclists, it’s in 2 busses. 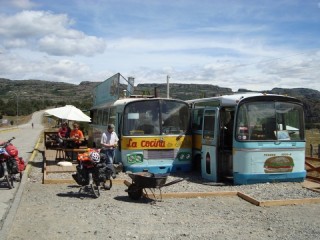 After that, we didn’t want to go on anymore, because after the town, it started going up immediately for a pass over 1100 meters (3300 feet) high (altitude of the town is app. 380 meters (1000 feet). So we went looking for a campground.

In the end, the pass wasn’t too bad. All cyclists talked about it being bad, but it actually went pretty equally and the road was paved. That made big difference and maybe that’s why we didn’t think it was too bad. After a short descent, there was another climb and on top there was a campground (sort of national forest campground). A very nice place, in the middle of the forest. We had only done 40 kms (25 miles), but again we didn’t feel like going on. So we pitched our tent there and made a fire to try to get rid of the annoying horseflies. To be able to shower and do the dishes, we first had to make a fire in to heat the water. Very nice. A lot of the water here gets heated by woodfires.

We thought the last 60 kms (36 miles) to Coyhaique would be easy, but that also turned out to be false hope. It was storming and we had to cycle about 50 kms (30 miles) with that headwind. And of course, up and down again over and over. What else… But this time we could go down more than go up. The road went through the hills, but then all of a sudden there was this wide valley with agriculture. We cycled through it for a while and then entered a smaller valley with nice rocks on the sides. Of course there was another hill to climb just before the city. Before every town you have to go up and after every town you have to go up again. 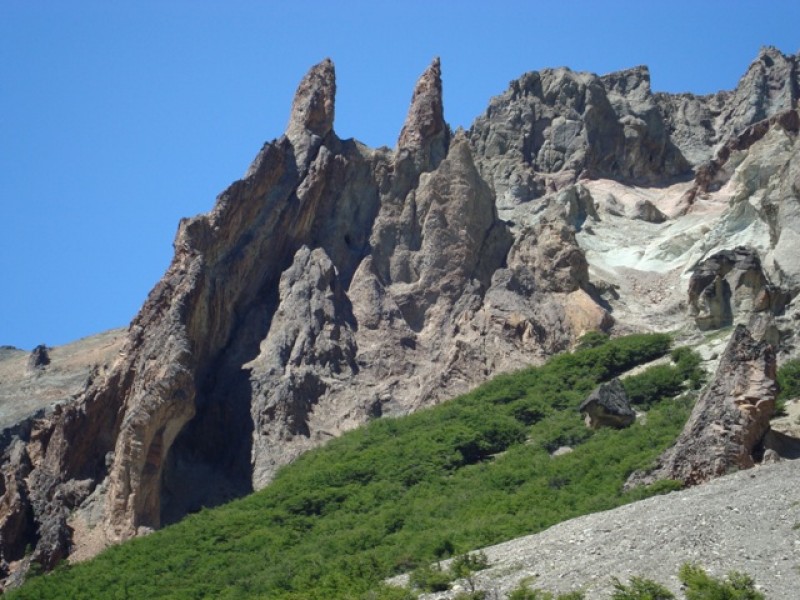 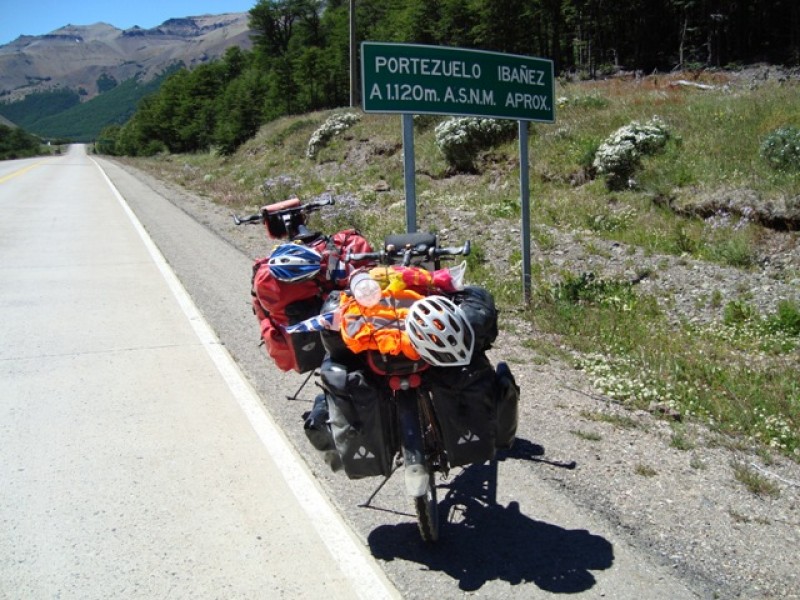 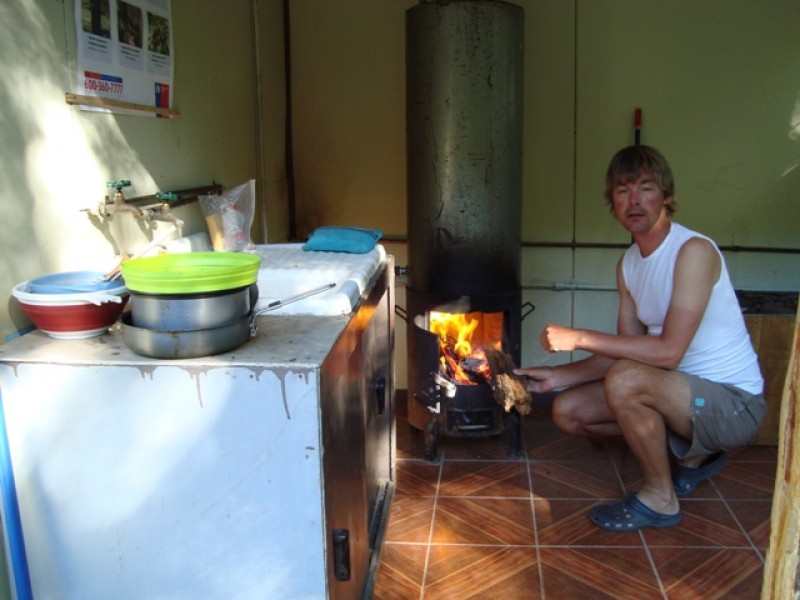 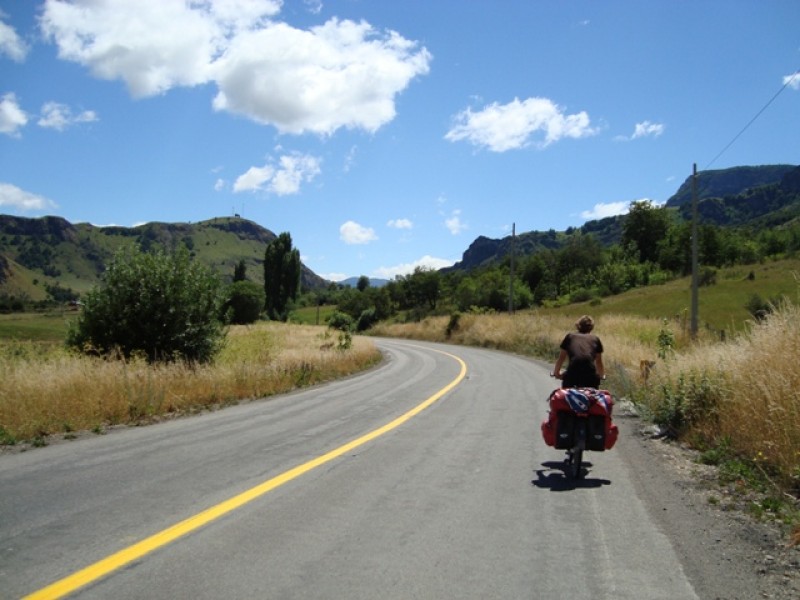 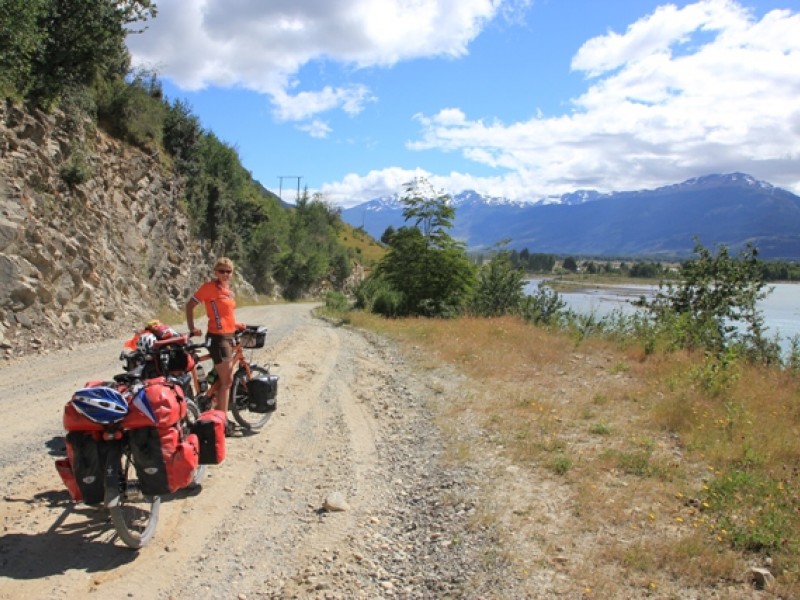 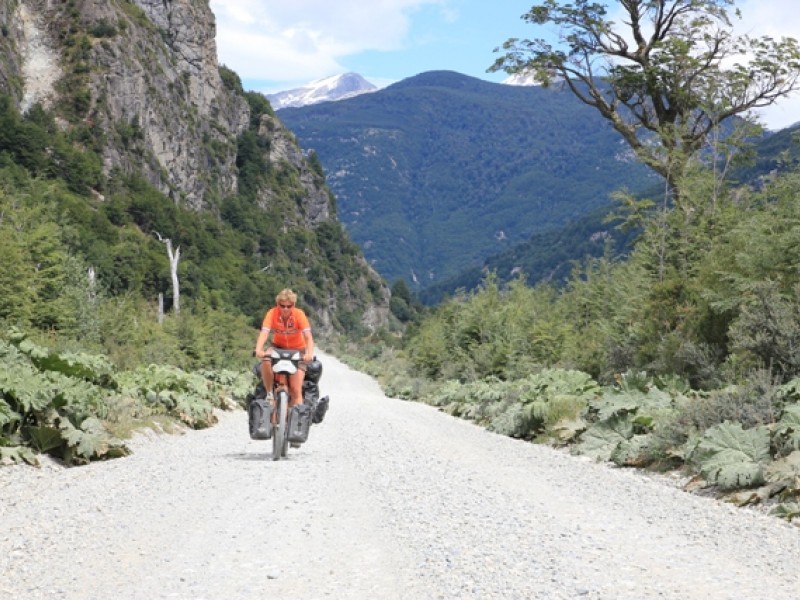 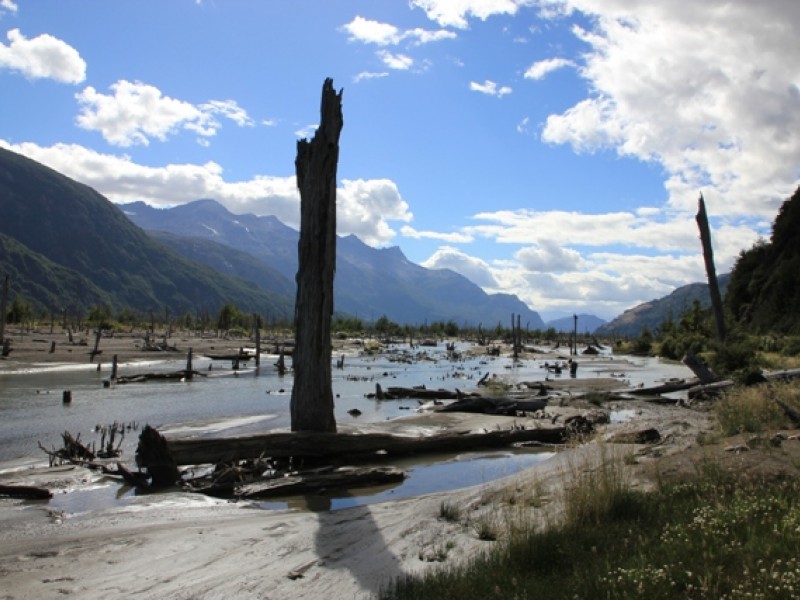 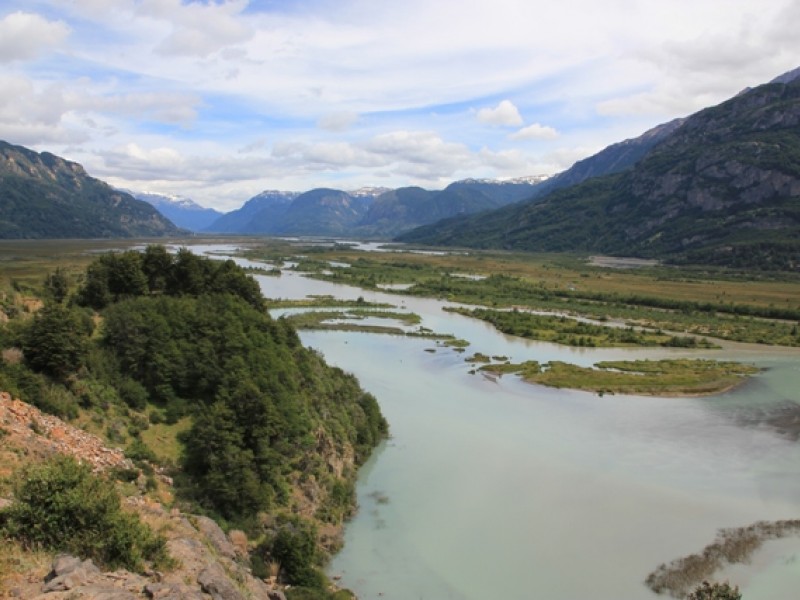 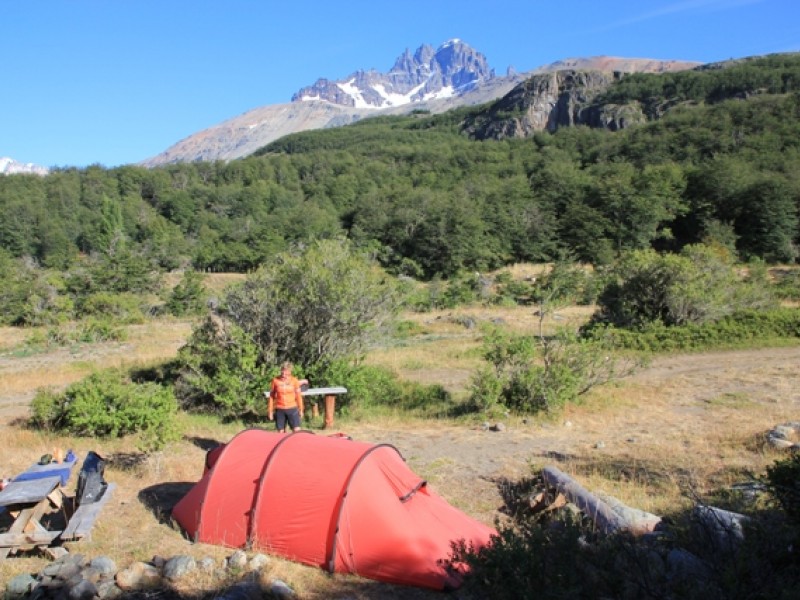 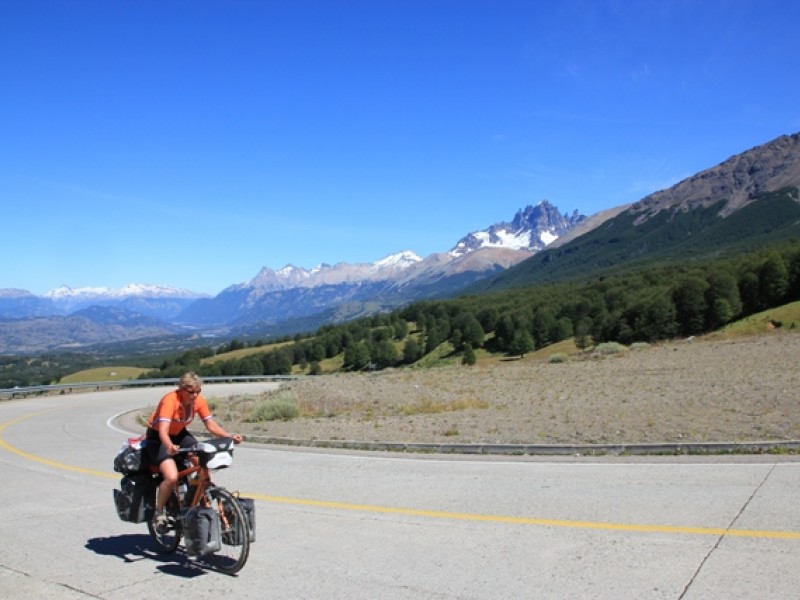 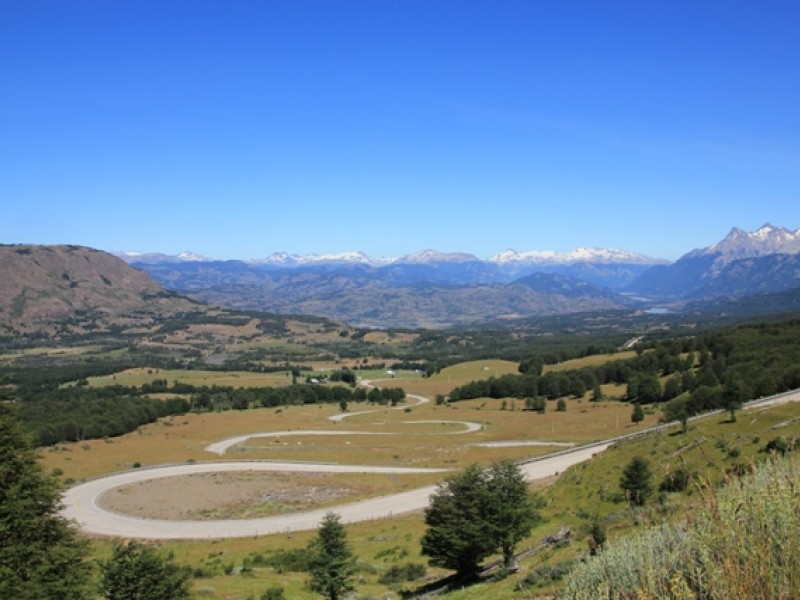 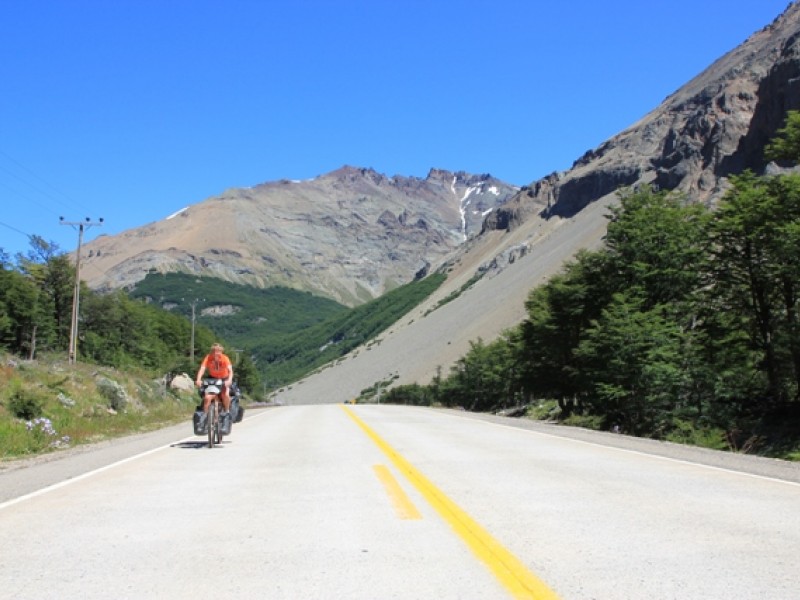 Finally, we rolled into Coyhaique. We had just entered city limits when we saw some other cyclists who were yelling and waving at us. Turned out to be Canadians who we had met around Cochrane. But they went south, so it was a bit weird that we met them now in Coyhaique. They had had some bad luck, and because they have to be in Santiago on a certain date, they had to change their plans and take an alternative route. They took the bus back to Coyhaique from Cochrane. Such coincidence again!

They had also met the Swiss and Karen and Gijs when they were in Cochrane, so they knew them also. They decided to follow us to a hostal where you can also camp (tip from other Dutch cyclists who we met on our way to Coyhaique and they gave the same tip to Gijs and Karen) to see if they were really there. And yes, they were there! It’s a very small piece of grass, filled with a lot of tents. Ours just fit in. After a few beers, they also decided to stay for the night and managed to squeeze their tent in. So it’s a crowded place. But it’s in the city and all the real campgrounds are outside the city. We have to take care of some things, so it’s easier to be in the city itself.

When all the others had left the next day, we moved our tent to a better spot. We couldn’t go to the postoffice, because it was Sunday so it was closed (even here). We went there today; sent 3 kg (about 7 pounds) of clothes home. Makes a big difference. Also went to the bicycle store with Linda’s bike to have the spokes checked out. They were very loose.

Now there good again. And of course we ate a lot, healthy and good.