We didn’t have any problems at the Panamanian border and we went looking for the Costa Rican customs in the hectic little town. We found it eventually, but it wasn’t our lucky day. The person behind the window was a young woman who obviously still had something to prove to her boss or had left her common sense in her bed that morning.

She asked us to show her the plain- or busticket out of the country. Even after seeing our bikes and the explanation of our trip, she wanted to see a ticket. Also, she had seen all the stamps in our passports, so she knew what we were doing and that we wouldn’t have a ticket. But no, missy wanted to have money then; $ 100,- per 30 days ‘visa’ per person. We had never heard of having to pay for Costa Rica, you should be able to get a maximum of 90 days and that’s free. So we weren’t going to pay. Showing a credit card wasn’t sufficient she said, she wanted to see a print of our bankaccounts. So we did that and then missy was finally content (she didn’t have much of a choice) and we got our 90 days. We still don’t know what the deal was with the money; if she just wanted it for herself (or the office) or something else. We didn’t hear anybody else about it; afterwards we spoke with some other cyclists and they didn’t have any problems getting in. They just got their stamp and left.

But that wasn’t a good introduction to Costa Rica! We were fed up with the country immediately. Fortunately that was compensated just a few kilometers further. Because of the delay at the border, it was a bit later than expected and the dark clouds were already coming towards us. From the border it was about 40 kilometers (24 miles) to the next town and 10 kilometers (6 miles) before we got there, it started pouring. We were just in time finding a place to shelter from it; a little shack where people sold drinks. Those people were very friendly and interested and offered us a few drinks. They were good, but we still don’t know if there was alcohol in there or not… But we had a good time and when we said goodbye after the downpour was over, our bad temper about Costa Rica also was (almost) over. 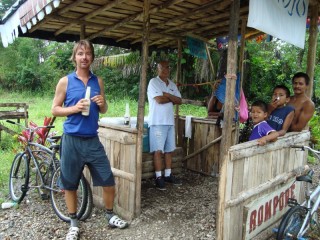 During the next days our image of Costa Rica became more positive. The scenery was beautiful and the people very friendly. We mainly cycled through rainforest/jungle and even though it was very hot and started to rain in the afternoon, it was beautiful.

We took the ferry to the Osa peninsula. There, in Puerto Jimenez, we camped again for the first time in a long time (Ecuador). We got a spot underneath a big plastic roof and that was necessary; as soon as we had settled in it started raining and it didn’t stop all afternoon. It was a beautiful spot, with huge iguanas running around the tent and chasing eachother and parrots in the trees above us.

On the boat from Colombia to Panama we had met people who run a luxury hotel/resort not far from Puerto Jimenez. We decided to pay them a visit. The first 19 kms (11 miles) were nice and flat, but the last 4 kms (2,5 miles) were very steep uphill. Even without luggage we had to walk. But the reward came immediately; monkeys in the trees! A whole group, with little ones. Now we had also seen monkeys already! When we were finally there, it was lunchtime and we were offered lunch. Then we walked to the beach and saw some more monkeys.

After a few days in the cute little town of Puerto Jimenez, it was time to move on. After a few flat kilometers the hills started again. Very steep ones, up to 12%… And we saw the dark clouds coming in again. When we were about halfway the steep hilly part, it started raining. First a little bit, but after a while it turned into a downpour again. This time there was no busstop or other shelter around, so we stood under some trees and tried to stay as dry as possible. After having stood there for about an hour, we decided to get back on the bikes. We were wet already anyway. We knew we still had a pretty long way to go, because there were no towns in the neighborhood. But we were lucky; after just a few kilometers we saw a restaurant where they also rented cabins. It was expensive, but it didn’t take us long to decide we would stay there for the night. But again, it was worth it; we had a cute little cabin and there were a lot of animals to be seen. Monkeys, parrots and tucans up in the trees and a raccoon-like animal (coati) on the ground. The next day, during breakfast, we could watch the monkeys play up in the trees.

Costa Rica also is invaded by Americans and even though you don’t notice it as much as in Panama, they and their influence are everywhere. Costa Rica is a very touristy country and most of those tourists are Americans. There also are many Americans who own a house here and live here. Just like the people we met in the small town of Uvita, Ildy and Ken, and who offered us to stay with them for the night.

About 20 kms (12 miles) from Uvita is the small surftown of Dominical. A cute little town with a big beach where people surf every day. Here also many Americans. We decided that we would like to stay here a while and rented an apartment for 2 weeks. A great place, with 2 large balconies, 2 bedrooms, a bathroom with a hot shower (luxury over here) and a bathtub and of course a kitchen to cook our own meals again for a change. We spent the days relaxing, reeding and going to the beach. We had our French cycling friend Jeremie stay with us one night and one day, all of a sudden we saw Kim and the boys arrive in town (by car). They camped on the beach and stayed for a week. So we had enough company.

We also rented a car for a week and went around exploring the country. We went into the mountains on very adventurous roads; steep and slippery unpaved roads sometimes not more than just a small path. We drove all the way to lake Arenal; a long drive but we wanted to see there so we didn’t have to go on our bikes. The lake is on the base of a volcano and the scenery there is very different from what we had seen in Costa Rica so far. Green hills and dairy farming.

We spent the last days doing nothing; on our balcony or on the beach. We feel sorry that the 2 weeks are over already; time went fast again. In those 2 weeks, we tried to live up to the Costa Rican slogan ‘Pura Vida’ which means something like ‘take it easy, enjoy life’. Hopefully we’ve had enough rest to be able to do the next 2500 kilometers (1500 miles) to Yucatan, Mexico.