The country Bolivia and its people

In about 8 weeks we crossed a large part of Bolivia, the only area we didn’t go to was the jungle in the east. Before we entered the country, we heard some bad stories about the country and the people from other cyclists. It wouldn’t be safe for foreigners, they would be threatened and yelled at. Also we had to watch our things and money because it would be gone in a second if we didn’t do that. In the last Argentinian town before the border, Abra Pampa, we were warned about the Bolivians again by a few local people. And then there were the many roadblocks where you got a strange and unsave feeling. Because of all that we didn’t think very positively about the country, but as always you have to see and experience it yourself.

And that’s a good thing, because our experiences in Bolivia are very positive. It started out immediately, in the border town of Villazon where is was lively and colorful. A big difference from the boring, colorless and sad villages in northern Argentina. When we were in Tupiza, where we stayed for almost 2 weeks, we discovered that the people are very friendly. Also in the rest of the country we only had positive reactions on being there (by bike). 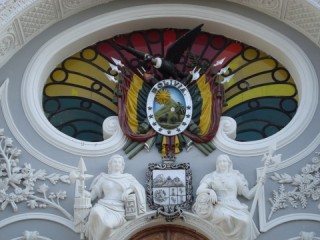 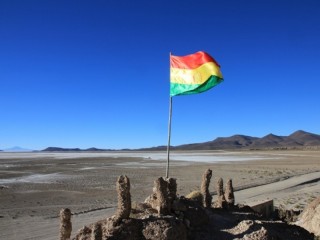 Bolivia is a beautiful country with stunning nature and (to us) mainly very friendly, interested and enthusiastic people. Sometimes somebody looked cranky, but when you greeted them a big smile would appear on their faces and they’d greet us back and wave. We were wished a good and save trip very often by people along the road. The kids are pretty shy but always waved enthusiastically when we waved at them.

The scenery is beautiful and varied. There’s the altiplano in the southwest with its immense emptiness and beautiful colors, the huge white saltflat at Uyuni and the high mountains with valleys, gorges and rivers in the central part of the country. Then there’s the jungle in the east where it also is supposed to be beautiful.

It’s just a shame that the Bolivian people don’t really seem to care for their beautiful country and just dump most of their garbage right beside the roads. This causes that there’s garbage and junk everywhere, sometimes big piles of it, and that it stinks everywhere. Dead animals also are kept lying beside the roads and that also stinks. Such a shame. 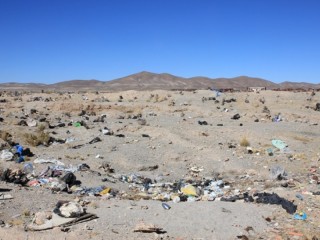 Daily life is mostly on the streets; there are (little) stands everywhere where about anything is being sold and you can also get almost everything on the markets. The foodmarkets and clothesmarket are usually separated, so you can just go to the one you need to go to.

Cycling (travelling) through Boliviaa is like cycling (travelling) back in time. A very large part of the population is very poor (Bolivia is the poorest country in South America) and lives in small clay huts in the countryside. But there’s also a lot of poverty in the larger towns and cities. An average monthly salary is about $ 125,-.

The women still do the laundry by hand in big buckets or in the river and the land is often being worked by hand and or oxen. To us it’s quiet charming, but for the people it’s a difficult and hard existence. Donkeys are used to transport things or the people carry it on their backs themselves. They use those beautiful colored clothes to put everything in, from the kids to groceries to crops they just got off the land. 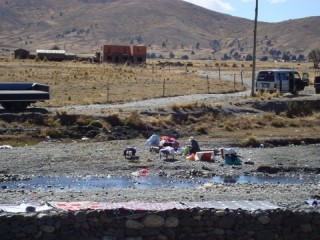 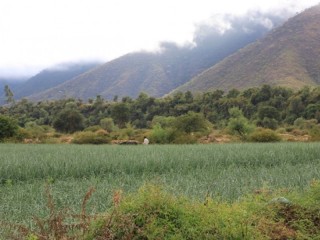 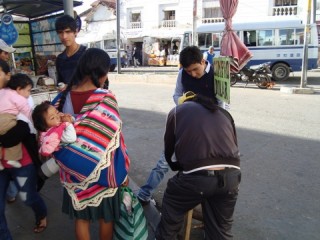 The (many) children also help out a lot, childrens labor still is very normal here. Whole restaurants are ran by kids not even 10 years old; the parents cook and the kids serve the food and take care of the money. Even though those kids usely are pretty cheerful, to us it’s very sad to see they have to work that hard at that age and probable don’t or barely go to school. They work from 6 am till 10 pm (or till when the work is done). We also saw some very little girls (maybe just about 4 years old) dancing for money on the streets at night. They were wearing the traditional clothing and they had a cassetteplayer with some music on which they moved around a bit. Very sad to see.

Third world or not?

Before we came to Bolivia we had this idea that it would be sort of a third world country where many things aren’t for sale. But that also proved wrong. The (women) fashion over here is not very different from our country. They have skinny jeans, leggings and normal jeans. But the traditional clothing is still worn a lot by the woman. On the markets you can find things like peanutbutter, Nutella, Snickers and products of Nivea and Dove and other articles we hadn’t expected that much. The fruits and vegetables are beautiful, good and the variety is huge. You can get just about everything here. 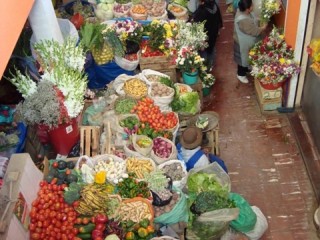 In Chile and Argentina it usually was pretty hard to find fruits and vegetables and if we had found it, the choice was very limited and it looked horrible. A lot of that stuff wouldn’t even make it into the stores in our country.

In spite of the modern clothes that are for sale here, many women still wear the traditional clothing, also in the cities and also the younger women. The traditional outfit exists of a skirt, length just above the knees, a blouse and some sort of vest that’s worn on top of the blouse. The older women usually wear a hat with that. The hair is braided into 2 thick braids on the back of the head. 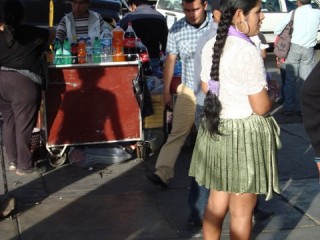 All the food is bought on the market, supermarkets are only in the big cities. You can also have lunch on the markets, there’s always an area with tables and different people who offer different (hot) foods. For about $ 1,50 you get a large bowl of soup and a big plate with a main dish.

The national dish is chicken in any probable shape, form and variety. In the small local restaurants you usually get a piece of oven baked chicken with a plate of rice. Also popular are milanesas (schnitzels; flat, breaded piece of chicken or beef). In almost every town you can go to a little restaurant where they serve ‘Pollo al spiedo’; grilled chicken. They are served with (of course) rice, fries or pasta. 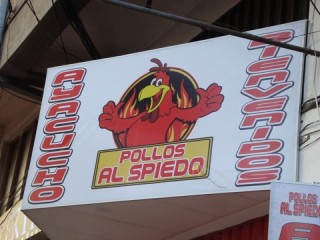 For breakfast, lunch or just a snack they eat a lot of salteñas. Those are a sort of pastries filled with vegetables and/or meat/chicken. Very tasty and often pretty spicy. 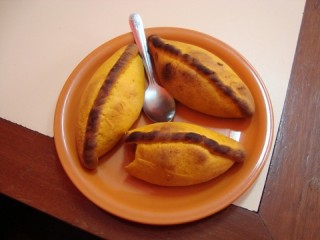 They really seem to love spicy over here. Where ever you eat, in every restaurant they serve a little bowl with some sort of dip (aji). It looks pretty good, but when you try it your mouth doesn’t stop burning all night. We have no idea what they put in there, but we know for sure that it’s made with a lot of peppers. The locals use it like ketchup, they put it on everything. Spicy is nice, but that’s just too spicy. With all those meals they drink a lot of soda, but that’s no surprise considering the spicy stuff. You can’t even buy a 1,5 liter bottle (normal in Europe) over here, it starts with 2 liters.

We really were astonished by the electrical showers. That’s a large showerhead with a few electrical wires leading to it from the wall and you only have one knob; to turn it on. As soon as you turn it on the water is heated through electricity. It depends on the showerhead (how many Watts), how warm the water gets. It also depends on how far you open the tap; the less you open it, the warmer the water gets. We had showers that didn’t get any warmer than just plain cold, but also ones that got nice and warm. You just have to make sure you don’t touch the showerhead while you’re taking a shower, because then you get an electrical shock. The knob can also be a bit electrical sometimes. 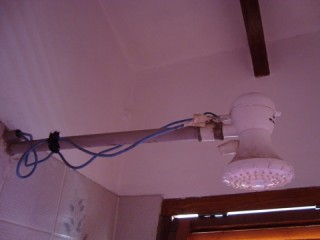 They don’t have heaters anywhere. Only in Potosi we had a room with a (gas)heater, but we had to pay a lot extra for that luxury. It’s a cold country because the whole western part is on very high altitude. Especially on and around the Salar de Uyuni and Potosi it can get very cold in winter. Because the people don’t have heaters in their houses, they keep wearing their jackets and dress warm. Also in the restaurants, it’s nothing special to be wearing your coat while eating. The reason they don’t have heaters is because there’s nothing to burn in it. There are no forest to get wood from, so there’s no fuel for fireplaces. Electricity and (propane)gas are too expensive, they can’t afford it. So they live with and in the cold. Many people also don’t have (hot/warm) showers for the same reason. They just shower or wash themselves with cold water.

What we also found pretty weird, were the European trucks driving around here. We sometimes thought we were cycling in Europe. Many trucks here are second hand trucks from Europe, mainly Denmark, Germany, France and also The Netherlands. They are transported here for a second life. The strange part about that is that they don’t remove the names of the previous owners/companies. And sometimes they even still have the license plates of the original country. So a couple of times we saw a Dutch truck with Dutch plates, just like being at home. Very strange. 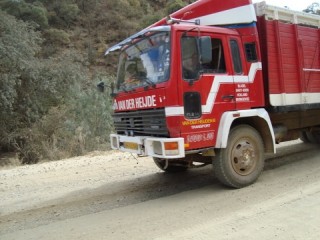 And then there are the banks. There are many banks, in the larger cities there’s a bank on about every corner of the street. Very frequently we saw long lines of people standing at the entrance or in front of the ATM’s. We still don’t really know why, but we think it’s because they had their salary paid out and want the money in cash. The banks are being guarded by (many) policemen with huge guns. They stand in front of the banks with those large guns ready to fire. 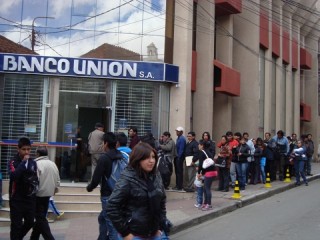 Of the countries Argentina, Chile and Bolivia we think Bolivia is the most beautiful one especially due to the large variety in landscapes. Cycling there is hard because there are almost no flat stretches, but that gets rewarded by the beautiful scenery. But you’re never alone. In the most secluded places, when you’re convinced there can’t be possibly be somebody else, you always see a person walking on the side of the road to an unknown destination or herding goats or sheep. 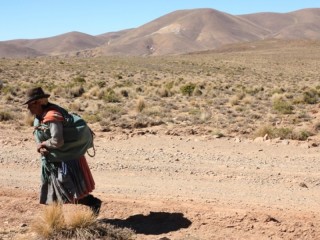 Overall, we had a very good time in Bolivia with many good and nice experiences. The things we were told didn’t prove to be correct (for us). It’s a beautiful country with very friendly people but the poverty, child labor, many (female!)beggers and pollution sometimes made us sad of what we saw. Because of that we once again realized that we, as Europeans, are privileged people and that ‘our’ kids really are hugely spoiled.

5 thoughts on “Bolivia in words and images”